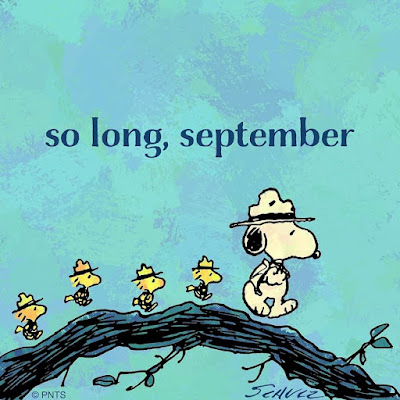 Hello, friends!  I woke up about 30 minutes ago and can't go back to sleep.  I wake up around 2:30 almost every night.  Usually I go to the bathroom and go back to sleep but not tonight.  *sigh*  Instead I am sitting here in the living room watching "Chopped" on TV.  I have 20 episodes recorded so I have enough to watch.  Along with several Hallmark movies and other various shows.  I need to pare things down.

At any rate, I am wondering where September went.  Surely it can't have been a whole 30 days.  It just doesn't seem possible.  I love the month of September.  It is probably my favorite month of the entire year.  And it always seems to just fly by.

Yesterday I took Joe to Lowe's to get some parts to fix our toilet.  It has been acting up for quite awhile.  Not to the point that it couldn't be used, but the water would run every once in awhile.  Now it started to make a weird noise every time someone flushed it.  Joe does know what is wrong.  He knows how to fix it.  But has found he can't do it alone.  His friend, Lenny, is coming over to help him with it.  We can still use the toilet in the meantime.  Thank the Lord because we have only one.

Once years ago when we were having work done in the bathroom and I couldn't use it, I drove my car to church and used their bathroom.  Glad church is close!

But now we are being hit with the edge of Hurricane Ian.  The rain is pretty heavy but at least we don't have the high winds.  Yet.  The weather says we will get them later.  But at least it is no longer a hurricane and the winds won't be as strong.  Bad enough though.

I have been trying to follow the Flylady system (again!).  This will be the third or fourth time I am trying to do it.  But this time I think I got it.  Not perfectly by any means, but my mind has changed in so many ways.  And with the way this house looks anything is better than nothing.  I know I can't keep on the way I've been going.

My main problem is my health.  When I was feeling good (and younger) I could keep up with things and work a full time job.  I have never been Miss Neat as my sister can tell you.  I used to pay her to clean my desk when we were teens.  But it was better than now.

A couple of days ago I had another a-fib attack that lasted 15 hours.  At least I could sleep through most of it and it wasn't really bad.  But I know it will get worse as time goes on.  I am trying to avoid foods which can trigger it.  I am trying to take it easy and not do things I shouldn't.  It's hard.  And even harder to clean with this going on.  So I need to make the most of the times I do feel pretty good.

But back to September.  I had such good times in it.  I celebrated my wedding anniversary.  I celebrated fall coming with my annual spare ribs dinner.  I made my first pumpkin dessert.  It has been a good month and I am so sorry to see it go.

In fact, this whole year is another one that has sped by.  People tell me that the older you get the faster time goes and it is surely that way with me.

Well, enough rambling.  I have my latest YouTube video up where I do a craft.  Another cooking one is in the list for next week.  I try to have a couple ahead in case something happens and I don't get to it.  I want to do another cute October craft today.  We will see.

And now I think I will try to go back to bed and get some more sleep.  I have at least 3 hours before I need to start the day.  Maybe 4 hours.  That would be nice.

Talk to you all later.  Sorry this is so rambling.  Happy October everyone. 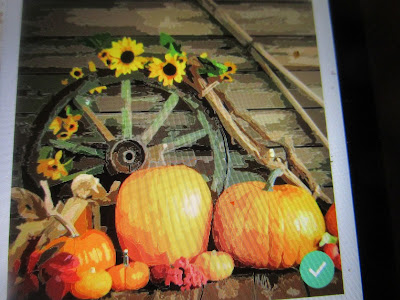