THE SAGA OF JACK 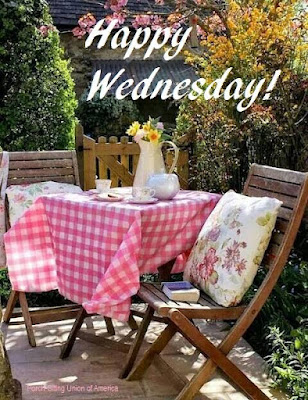 Hello, friends!  Hope you had a good day today.  Is it cold there?  Although it is warmer than it was yesterday, it was still pretty cool.  We finally gave in and lit the fire in the stove. Can you believe it is October already?  I sure hope this month goes slower than September.  Yesterday my sister said she blinked, and it was gone and that is exactly how I feel.  But the calendar page has turned and so I guess it really is a new month. 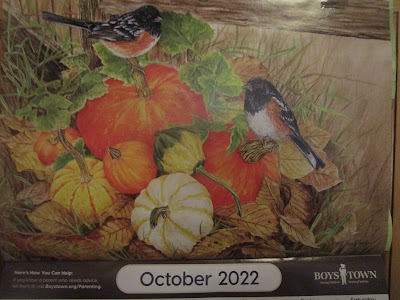 Today I thought I would tell you about my cat Jack. 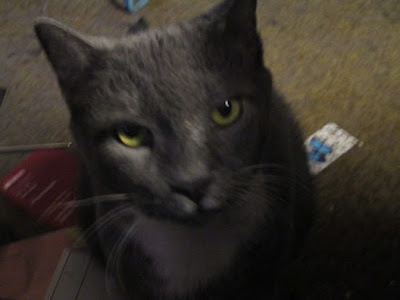 Jack is a cute, but mischievous, cat.  He is curious and when the front door opens, he looks out.  But in the five years we have had him, he has never tried to go out.  Until ...  Well, I really don't know when he ran out.  No one saw him.  I think it was Saturday night.  But I didn't miss him until Sunday.  When his litter box hadn't been used and his food was uneaten, we knew something was wrong.  We began searching the house -- Joe more than me since my legs are so bad.  No Jack.  Called.  Put out his favorite food.  Nothing.  I started crying and put out on Facebook what was going on.  He was missing all day on Sunday and Monday.  I was crying all the time.  Joe and I searched every nook and cranny in the entire house and no sign of him.

But Jack is afraid of being outside.  To top it off, he has no voice box and can't meow.  He just purrs loudly when he wants something.  Or is happy.  He also has a gag reflex and has trouble eating.  I was so worried.  But at the same time, I thought he must have gotten out because we looked everywhere in the house, and he just wasn't anywhere.

Monday night Joe said he was tired and was going to bed.  I said I wanted to watch the 11 o'clock news and then I would be up.  At 11:30 I turned off the TV and was about to turn off the lights when I heard something outside.  It was like a low gutteral sound.  I had never heard anything like it.  I thought it sounded like cats fighting and went to the door to see if one of them was Jack.

When I opened the door, there was a cat on the top step.  He jumped down and started to run away.  It was dark and I couldn't see if it was Jack or not.  We have a bunch of strays around here.  But I yelled, "Jack" and he stopped and turned around.  Then I opened the storm door and said, "Come here, Jack."  He came up the steps and poked his head into the house.  I saw it was him, but I was afraid to try to pick him up that he would run away again.  I said, "Come on.  Come here, Jack" and opened the door wider.  And he walked in.  It was him!

Jack had been out during the end of the hurricane and when the temperatures had dropped into the 40s.  He was wet and cold.  We took a towel and dried him off.  I fed him, but he wouldn't eat.  Joe gave him some treats, and that he ate.

Since he has been back, Jack is a different cat.  He no longer scratches and tears up our furniture.  He no longer tries to bite and scratch me.  He used to try to eat every piece of plastic he could find.  Bags, packages, etc.  Now, nothing.  In fact, his favorite thing now is to sleep in Joe's recliner. 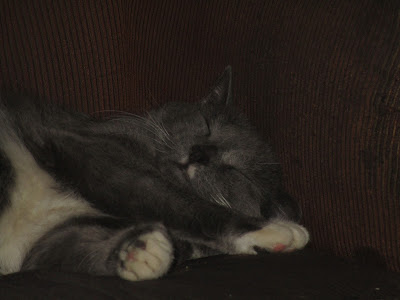 We still can't figure out how he got out or where he was for two days.  But I am so glad he is back.  I know I will outlive him and someday I will have to say goodbye forever to him.  But not now.

Well, that was an exciting (and sad) way to start the month.  I hope the rest is calmer than that.  And that you have a nice and calm evening.  See you all soon. 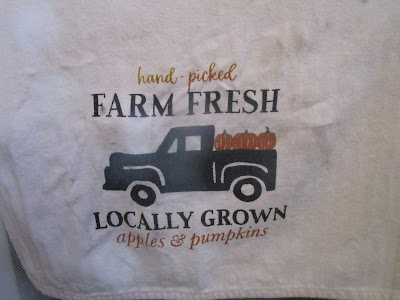 My dishtowel for this week.