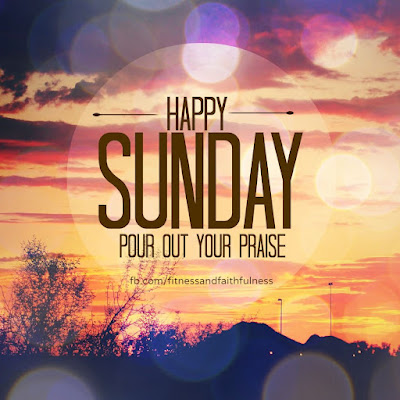 Hello, friends!  Hope you are all having a lovely day.  It has been a long time since I did a Sunday Praise post.  I no longer have a Sunday School class, but I continue to get free lessons sent to me from the U.K.  I thought I would share this week's lesson with you.  The theme is John the Baptist.

Even before John was a baby, his parents knew God had a special plan for him.  Zacharias and Elizabeth were too old to have a baby.  His birth was a miracle.  He was Jesus' cousin.

Zacharias and Elizabeth were good parents and taught John what it meant to obey God.  They thought, when he was old enough, John would also become a priest.

But God had a special mission for John.  Instead of working at the temple as a priest, he moved to the desert.  He wore clothes made from camel's hair.  He ate locusts and wild honey.  (Matthew 3:4)

He began to preach an important message.  John taught people they needed to repent.  Many people came to listen to him.

Some people thought he was crazy.  Some religious people told him off.  But others believed his message and repented of their sins.  They said sorry for the bad things they had done and began to obey God.

John baptized them in the Jordan River.  It was a way to show they really meant what they said.  It was like washing the bad things away.

Many people repented of their sins and were baptized by John.  John was preparing the way for Jesus.

This lesson made me wonder how I prepare the way for Jesus.  How do I show evidence of my repentance for my sins?  Many people talk the talk but do not walk the walk.  I need to be so careful that I am not like one of them, but that Christ shines through me always.

On another note, I thought I would let you know that I went to my primary doctor this week.  The pain in my left arm is so intense that I can barely move it.  Now the pain is going up my neck and into my back.  After examining me (and pushing in a spot on my back that was so painful I almost screamed) Dr. Barbara said that it was not a torn rotator cuff or even torn ligaments in my arm.  It is a torn tendon in my neck.  She knew what it was immediately from where the pain was.  I am now on steroids and will be getting an X-ray this week of my neck and shoulder to make sure her diagnosis is correct.  Hopefully this will clear up itself without any further treatment.  If not, I will be seeing an orthopedist.  But what a relief to finally know exactly what is wrong with me and to be getting some treatment.

I am going to end for now.  Hopefully I will be back later this week with another post.  I'm trying to keep in touch.  Really trying.

See you all later.